I’m a foreign affairs and security professional fascinated by South Asia’s interactions with the Middle East. I blame it completely on being an Indian kid who grew up in the UAE.

This fascination grew into an obsession from 2011 when I began exploring India’s interactions with the one country that straddles these two regions – Iran. There’s been no looking back. 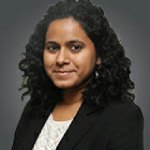 Sumitha Narayanan Kutty is an Associate Research Fellow with the South Asia Programme at the S. Rajaratnam School of International Studies (RSIS), Singapore.

She is a frequent commentator in the media including BloombergTV, Channel News Asia, Mint, Business Standard, The Diplomat, Lawfare (Brookings), LobeLog, Al-Monitor and has contributed to journals such as The Washington Quarterly and Asia Policy.

Sumitha has previously worked as a research scholar at The Takshashila Institution, India and as a communications consultant at the World Resources Institute, USA. She was a broadcast journalist at Times Now (India) from 2007-2010 where she assisted in the coverage of the 2008 Mumbai Attacks, parliamentary/state elections, and political and security developments across South Asia.